Our final day in the lakes dawned, and the sky was blue, sun was shining and the hills were white.. We'd only planned a short walk as we were on our way back to Bristol which is a 5 hr drive including stops.

We parked up in Glenridding and followed the track towards the YHA. I liked the sound of the Wainwright Glenridding Dodd, on the map it looked impenetrably craggy and Wainwright's description also made the route up sound tricky. Not long past the houses a path heads up onto the hill, we headed up then followed it to curve round the hill with views down to Ullswater below. We then picked our way up on a faint path through the scree which was steep (much to Emma's disgust) but thankfully it deposits you onto the top of the hill once the climbing is finished with. It's a lovely top with rocky knolls and a great place to stop in the sunshine. Looking at the routes others have taken there are easier alternatives but I enjoyed picking our way over over the scree! 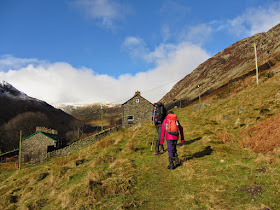 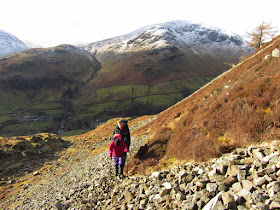 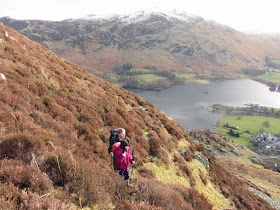 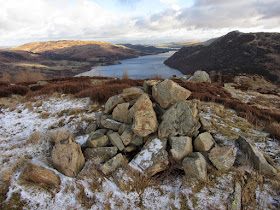 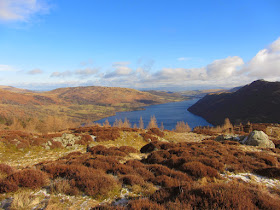 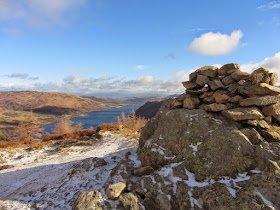 We descended the easy way down towards our next hill - Sheffield Pike. Rather than heading straight up we followed a good path in the shadow of the hill, annoyingly the path continued to contour off in the wrong direction so we decided to head straight up. It was steep and awkward as the snow was thawing and slippery. Emma's legs were tired from the day before and by the time we got to the top she was in a foul mood! 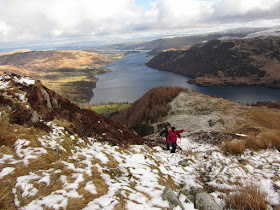 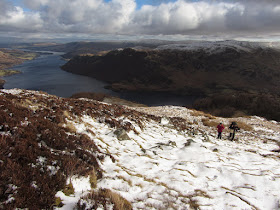 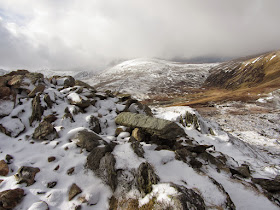 Some sweets cheered Emma up somewhat, and seeing the snowy slopes of Raise we were tempted to extend our walk. Although we had microspikes and poles we hadn't brought full on winter kit (ie axes and crampons). We decided we would see what the conditions were like and descend if things got too difficult. The slopes of Raise on our route up were gentle, and not over any drops. We dropped down to the spoil heaps, and headed up to pick up the old 'chimney' which goes up Raise. We chose this way up rather than the path to Sticks Pass as it's much gentler at the top. Emma enjoyed some sledging on the snow as we made our way up. 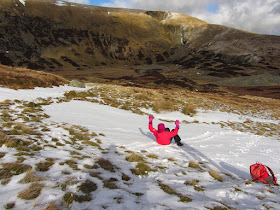 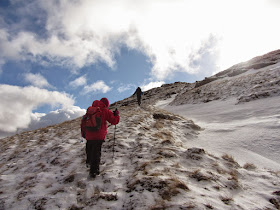 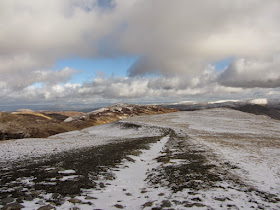 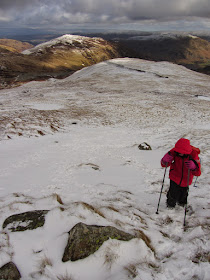 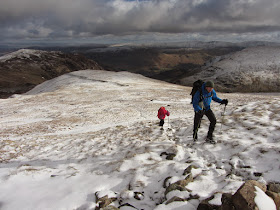 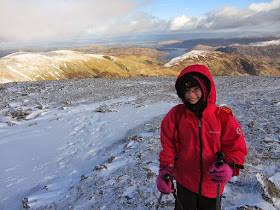 My camera battery was virtually dead by this point, and even frequent warming of the battery wasn't working so there's not many snaps from here onwards. After crossing a few snow slopes we were soon at the ski tow much to Emma's delight - the first time she's ever seen ski-ing on snow rather than just on the TV (another activity she now wants to try!)! It was only a short climb to the top from the ski tow. The views of the Hellvellyn range were fantastic, looking very wintry in their snowy jackets. We didn't stop for long as the wind was biting and we headed back to a small slope by the ski tow to do some sledging and practice ice axe arrests. Emma picked it up faster than me! 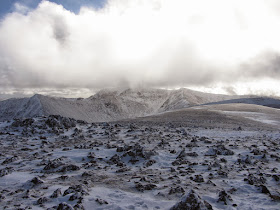 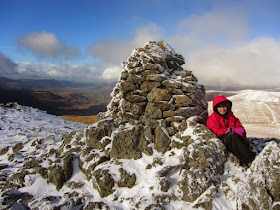 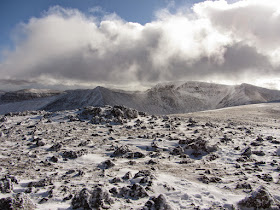 We headed back the way we had come to follow the chimney back down to the eroded path at Stang End, it would have been nice to have taken an alternative route, but it was already mid afternoon and we had the long drive to think about. We were glad of our poles on the crumbling path, and even happier when we reached the lane back to the car. We were so lucky to have such a sunny last day in the hills and to be able to enjoy a snowy walk with Emma. The Lakes in all it's shining glory! Emma voted it the best walk ever despite the earlier bad mood!